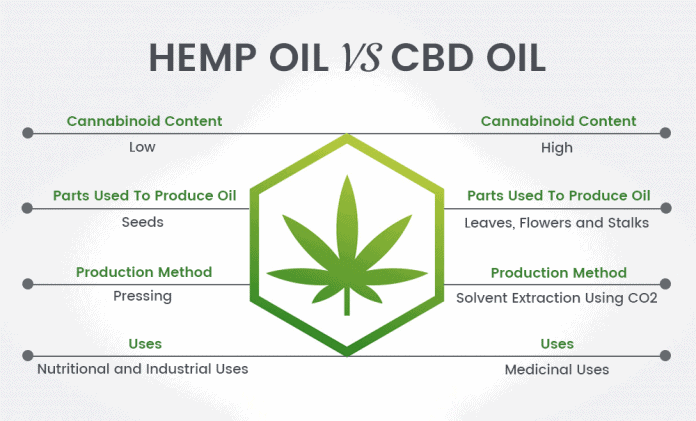 What’s the Difference Between Hemp and CBD Oils?

With the “cannabinoids rush,” some companies are jumping on the chance to sell their hemp oil products but mixing the terms CBD and hemp oil up — by purpose or not. Really CBD oil and hempseed oil are from the same cannabinoids’ family, they’re often incorrectly marketed as the same thing.

Major motivation is that consumers are ready to pay more for cannabidiol oil, which is a pretty expensive ingredient compared to hemp seed oil. Hemp oil is not the same as cannabidiol (CBD) oil. The production of cannabidiol oil uses the stalks, leaves, and flowers of the hemp plant, which contain a higher concentration of CBD, another potentially beneficial compound in the plant. Hemp seed oil comes from the small seeds of the Cannabis sativa plant.

Both, CBD and hemp oil are distinctive products that may benefit our health but do so in separate ways. It’s easy to confuse cannabidiol and industrial hemp oil because more recently, with the CBD craze, CBD companies have used the name hempseed oil to advertise their CBD products. Most companies don’t want to complicate the market but have preferred to apply the term hemp-seed oil as opposed to CBD oil to evade problems with the FDA and some other requirements.

How CBD and Hemp oil works

All cannabis-infused products, including CBD oil, create impacts in the body by connecting to certain receptors. The human body generates several cannabinoids on its own. It also has two receptors for cannabinoids, called the CB1 receptors (they are in the brain deal with coordination and movement, pain, emotions, and mood, thinking, appetite, and memories, and some other functions) and CB2 receptors (they are more common in the immune system, they affect inflammation and pain). CBD works with CB2 receptors of the immune system. On another hand, THC acts in a manner that is like the body’s natural cannabinoids by binding to the CB1 and CB2 receptors of the brain to alter perception.

Hemp oil is a super-food and people ate it for its high levels of Omegas naturally observed in the hemp oil. Hemp seed oil includes a 3:1 ratio of vitamins and other nutrients. Because of the omegas and vitamins, hempseed oil may be excellent for general health. Hemp seed oil can be purchased on Amazon and Ebay, but CBD oil cannot.

Many researchers of cannabidiol Oil benefits found that CBD is effective at relieving anxiety, depression, pain, inflammation, improving sleep, or has other health benefits. A CBD product (Epidolex) has been FDA approved to treat epilepsy.

Though they can both be used topically or ingested, you’re more likely to use hempseed oil topically and ingest CBD oil.