Cannabidiol, Medical Cannabinoids in Pediatrics and for Epilepsy Treatment

Cannabidiol in Pediatrics: There have been more than 10 studies of medical cannabinoids for the treatment of seizures in children and adolescents. Severe childhood epilepsy are characterized by frequent seizures, neuron-developmental delays and impaired quality of life. Childhood epilepsy beginning in the first few years of life are frequently characterized by seizures that are resistant to available treatments.

The research in cannabinoids as a seizure treatment in children has grown rapidly over the past decade, with the number of studies investigating it as an anti-epileptic equaling the number of studies for all other pediatric conditions combined. Research did find that CBD significantly reduced convulsive seizure frequency in children with treatment-resistant epilepsy in Dravet syndrome as compared with a placebo. Beneficial effects of cannabidiol-enriched cannabis other than reduced seizures included better mood, increased alertness, better sleep and decreased self-stimulation. Negative side effects included drowsiness and fatigue.

The U.S. Food and Drug Administration today approved Epidiolex (cannabidiol) [CBD] oral solution for the treatment of seizures associated with two rare and severe forms of epilepsy, Lennox-Gastaut syndrome and Dravet syndrome, in patients two years of age and older. 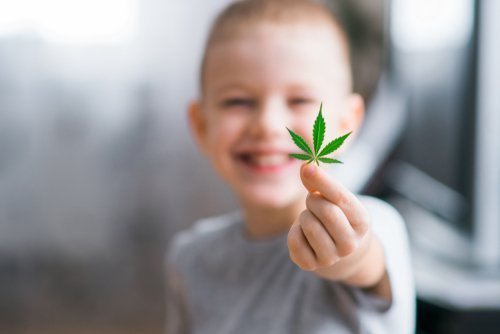 Despite remaining one of the most widely abused drugs worldwide, Cannabis sativa exhibits remarkable medicinal properties. The Phyto cannabinoids, cannabidiol and Δ-9-tetrahydrocannabinol, reduce nausea and vomiting, particularly during chemotherapy.

This is attributed to their ability to reduce the release of serotonin from enterochromaffin cells in the small intestine, which would otherwise orchestrate the vomiting reflex. Although there are many preclinical and clinical studies on the effects of Δ-9-tetrahydrocannabinol during nausea and vomiting, little is known about the role that cannabidiol plays in this scenario. Since cannabidiol does not induce psychotropic effects, in contrast to other cannabinoids, its use as an anti-emetic is of great interest.

Cannabidiol Use in Children with Autism Spectrum Disorder

Children with autism spectrum disorder (ASD) commonly exhibit comorbid symptoms such as aggression, hyperactivity and anxiety. Several studies are being conducted worldwide on cannabidiol use in ASD; however, these studies are still ongoing, and data on the effects of its use is very limited. In this study we aimed to report the experience of parents who administer, under supervision, oral cannabinoids to their children with ASD.

Parents’ reports suggest that cannabidiol may improve ASD comorbidity symptoms; however, the long-term effects should be evaluated in large scale studies.

Spasticity is a condition in which certain muscles are continuously contracted. This contraction causes stiffness or tightness of the muscles and can interfere with normal movement, speech and gait. Spasticity is usually caused by damage to the portion of the brain or spinal cord that controls voluntary movement.

The federal government’s classification of cannabis as a Schedule I controlled substance has hampered scientific study in the United States for decades, but a landmark report from The National Academies of Sciences, Engineering, and Medicine said there’s definitive scientific evidence cannabis provides therapeutic relief in reducing spasticity symptoms in patients with multiple sclerosis (MS)—and two recent studies on medical cannabis and cerebral palsy conducted in Israel, a global leader in medical cannabis research, hold promise.

The beneficial effects of cannabis were significant enough that many test patients have continued treatment with medical cannabis. More and more companies are offering CBD oil as a treatment for children with cerebral palsy who not only experience seizures, but also have muscle spasms and chronic pain. Remember, however, that state law and even personal preferences may prohibit your child’s doctor from giving you a recommendation.

Parents are using the cannabis compound to manage hard-to-treat ailments in kids, but there are still many unknowns.

CBD products sold online and in retail stores are mostly unregulated, making it difficult to know whether the tinctures, balms, gelcaps, and gummies available contain what the label claims.